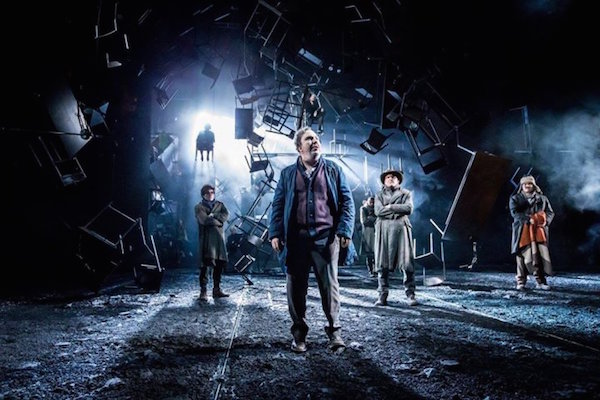 SOUND member Sterre Maier tells us about her involvement with the National Theatre’s production of As You Like It.

For the last five months I’ve been involved in the production of As You Like It at the National Theatre, as a member of the choir and ensemble. This meant that I had to miss most SOUND rehearsals and gigs, but they were replaced by the amazing opportunity to perform with a marvellous company and choir on the Olivier stage!

It has been a brilliant journey, and extremely different from singing in any other choirs, as the play always comes first and we provide a backdrop for it. For example, we had to rehearse soundscapes as a music score, which had to be very precisely arranged to make sure it wouldn’t overtake the text and action. Practising weird noises at work: what a dream come true! We tried out lots of different types of wind, (the play goes through all 4 seasons), explored different bird noises and found out who could do the most convincing sheep… This then had to be readjusted as we went into tech and even through previews to accommodate the text we were reacting to, and where each of us was placed in the set. I can’t remember how many versions we went through, but we were all so relieved after opening night, to finally be able to stick with what we were doing!

There is, as one would expect from a choir, also some singing in the play! The music for this piece is written by Orlando Gough, composer for opera and theatre and founder of the amazing a capella group The Shout. My favourite song is a haunting version of “Blow, blow thou winter wind”, a solo sung by Fra Fee who plays Amiens, with gorgeous a capella accompaniment by the choir.

In the second act the actors take over most of our soundscape efforts, which leaves us to musically underscore transitions, characterisations and moments of love. Not forgetting the disappointment chord added to Audrey’s entrance when she once again can’t find her goats, which gets a big laugh every night!

Some of our choir members get to join in with everyone’s favourite scene: the sheep, and when the understudy was on for the role of Celia I had my own sheep-debut – ticking that off my bucket list!

However most of the time I’m either climbing in a “tree” upstage, hooked in with a harness, or dangling down from the ceiling on a chair which is suspended out of view from the audience during the exciting scene change. I get to see their faces as they’re being blown away by that design and technical masterpiece.

We will be performing until the 5th of March, and there will be some NT Live encore showings in cinemas, so do look it up if you’re interested. I will definitely miss the company and the work, but am looking forward to finally be able to join in with SOUND rehearsals again!